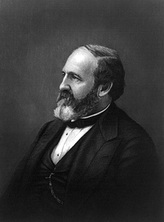 Collis P. Huntington was a master salesman born on October 22, 1821 in Harwinton, Connecticut.  He was the main power behind the railroad, but preferred to stay behind the scenes. Huntington began working at a young age on the family farm to contribute to the family income.  He later moved to New York to work for his brother who owned a general store and eventually became partners.  After gold was discovered the brothers decided to start a business to supply miner's.  Collis moved to San Francisco and opened a shop where he befriended Mark Hopkins and formed a partnership.  Later, the two would would invest in other ventures such as the Transcontinental Railroad and lead to the eventual creation of the Big Four. 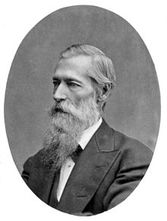 Mark Hopkins or Uncle Mark as he was commonly referred because of being the oldest of the four shopkeepers, was born on September 1 1813 in Henderson, New York.  Hopkins and his family moved from Henderson to Saint Clair, MI when he was a young boy.  It was there where he studied law and earned many titles such as bookkeeper and manager.  As time passed Uncle Mark moved to California to start the New England Mining and Trading Company.  Later he met Huntington and they created Huntington Hopkins & Company, a hardware and iron business. 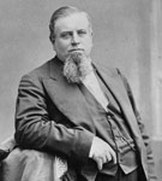 Charles Crocker who was born on September 16 1822 in Troy, New York was a major contributor to the construction of the Transcontinental Railroad.  When  he was fifteen his family moved to Indiana where they owned a farm.  It was here where Crocker had many jobs working at farms, sawmills, and an iron forge.  In 1845 he began working for himself when he opened his own iron forge.  From there he saved his money and founded the Central Pacific and became the construction supervisor and president of the Charles Crocker & Co. 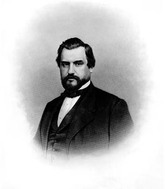 Leland Stanford was a lawyer and one term governor of California who used his political knowledge and business background to his advantage to help create the Transcontinental Railroad.  Born on March 9 1824 in Watervliet, New York he attended Clinton Liberal Institute and later joined the seminary, which he dropped out of.  Stanford later received his law degree and moved to California to work with his younger brothers who owned many stores.  Stanford used his notoriety and success to join the other shopkeepers.